Now that we’re well into May, we thought it was about time we gave an update about our #10KbyMay campaign. If you’re not aware, the campaign was launched by us back in January, with the aim to raise awareness of the impact of domestic abuse on women and children in Northern Ireland, as well as raising awareness for the work that we do here at Belfast & Lisburn Women’s Aid. We also set ourselves a target of raising £10,000 to help us continue to provide the range of support services we do, such as counselling, group sessions and wellbeing programmes for women and children.

The response to the campaign over the past three months has been nothing short of amazing; we had over 60 individuals sign up directly through us to take on the 10K challenge, including staff and customers from Donaghy Bros Electrical in Kilrea who took on their challenges individually but together, snapping some great photos as you can see below. We’d like to thank Emma in particular for co-ordinating Donaghy Bros’ involvement and being so enthusiastic about the campaign!

By launching this campaign, we hoped to create a community of like-minded supporters who were keen to get active and join us in raising awareness and fundraising, and that’s exactly what happened! We are so grateful for each and every person who got involved in the campaign, whether you shared our social media posts, wore our T-shirts, donated to our JustGiving page or took on the 10K challenge yourself. It’s been a wonderful three months virtually getting to know you all a little. Here’s to an exciting future of awareness and fundraising with our lovely supporters by our side! 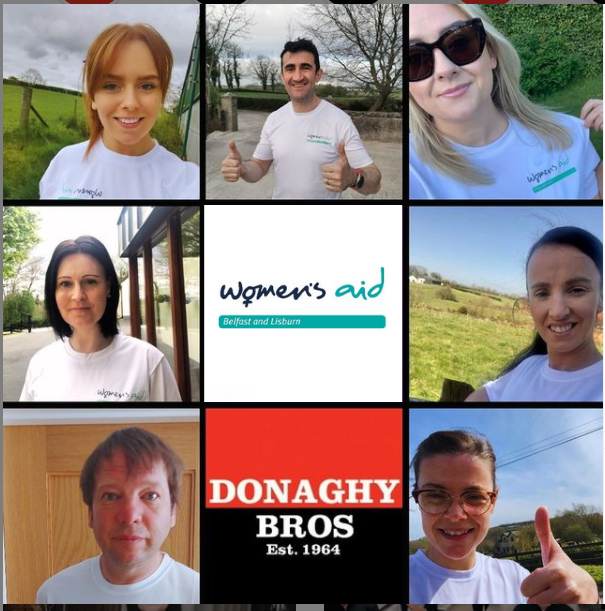 Not long after the #10KbyMay campaign launched in January, Glentoran FC’s social partnership co-ordinator Karla got in touch with us to find out how to get the club and its supporters involved. From then, Karla, Ian and all involved behind-the-scenes at Glentoran FC have been supporting us in our efforts to raise awareness, as well as fundraising for us too.

On Sunday 2nd May we went down to the Oval football ground to take part in the restriction-friendly, socially distanced 10K around East Belfast. The atmosphere was brilliant; there were banners, balloons, music and lots of people all dressed in fabulous Women’s Aid X Glentoran T-shirts designed by one of their volunteers. You can read more about the day here.

We are absolutely delighted to have had such genuine and committed support from not only the event organisers at Glentoran FC, but also players from the men’s and women’s teams, as well as from supporters clubs such as the Dundonald Glentoran Supporters Club.

Thanks to everyone involved!

Finally, we would like to extend a huge thank-you to every single person who signed up to and took part in our #10KbyMay challenge. We have been humbled by the amount of support we have received off individuals across the region and are incredibly excited to have you on board. As we come out of lockdown, we become more hopeful that we will be able to launch more fundraisers and events for you to have the opportunity to be involved in. The support you have given us means the world to our organisation and the women and children we help every single day. From the bottom of our hearts, thank-you.